The wind is strong.

It’s all relative though, as with everything else in the city. So it’s no surprise that the CBD is experiencing relative calm while Woodstock, where multi-disciplinary artist Breeze Yoko (TaKasi)’s been painting for the past two days, looks like a high-paced rave, only the dancefloor’s likely to be invaded by stray objects, like tree branches and flying roofs which will wreck anything in their path, including spray cans and ladders and bicycles and people’s car windows, as opposed to lean-sippin’ trapgods strung on gqo trips and Gqom beats.

It’d been a dope past two days hanging with the gahd, but a Saturday afternoon in Woodstock’s befok Kaapse dokter conditions watching Breeze bring to life a project which started on a wall in Khayelitsha, some 30 kilometres outside of Cape Town, in 2016, didn’t seem like a sound wave to be on. 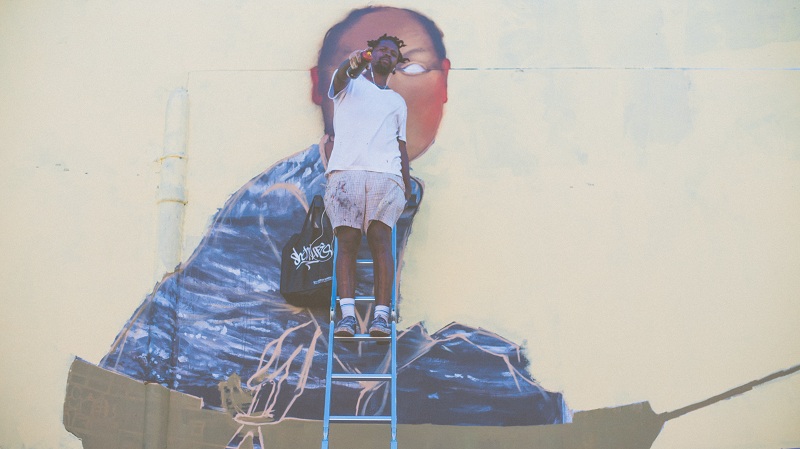 Boniswa, the lady in the life-sized Khayelitsha mural, is depicted with a gaze directed permanently towards the city. After the people at Blank Projects gallery contatcted Breeze, offering him their wall to paint, he thought it’d be dope to trace Boniswa’s journey from the Cape Flats, to Cape Town city centre.

What a fly way for her to travel, and what a strong metaphor it is for a black girl with colourful clothing to slide through the city on some boat steeze, giving not a fuck about what lies in her way; not merely gazing, but moving towards a reality she defines?!

Boniswa, to me, says to black and brown babies in Cape Town, and in the Global South, that fuck it, just set sail and do the damn thing at every opportunity, because not a damn thing is guaranteed for us kids who are born on the unpalatable side of the racial divide.

Breeze’s phat and thin nozzles spat through Cape Town’s shifty weather conditions. He managed to compelete the wall in five days. Dathnini Mzayiya, whose studio’s located across the road, assisted with adding detail with his brush. In addition to studio work, Breeze has also been curating exhibitions and painting walls elsewhere, and was off to Europe for 3 months following this piece where he produced work in the UK, France and Sweden.