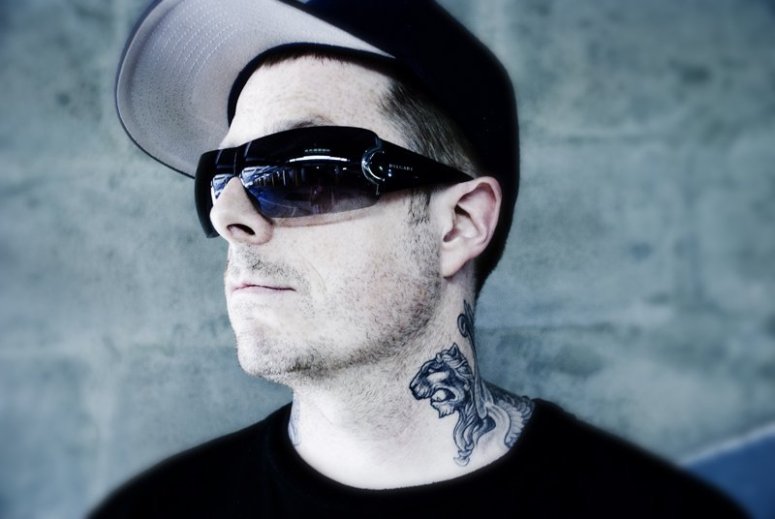 I meet with the subject of my interview by the roadside during a particularly subdued lunch hour in Cape Town’s CBD. On the other side of the road is what seems to have been a block of offices, now decrepit and torn down. All that remains of it is rubble – no form, just abstract pieces of concrete which fail to provide the slightest clue of what once used to belong to someone.

Admittedly, ‘the subject of my interview‘ seems too cruel a phrase; it strips the process of human engagement, subsequently relegating personal touch to second-place in favour of digging for cold, hard facts. The facts are there in abundance though – enough of them to tell a story that carries weight. For one, Damian Stephens  (alias Dplanet) is a UK-born producer/label executive who, for the past fourteen years at least, has called the city of stark contrasts that is Cape Town, his home.

He was already around on planet earth when the now-uber phenomenon that is hip-hop culture was in its infancy, and has lived to become somewhat of a mythical figurehead as CEO of the independent Pioneer Unit Records imprint. The label is constantly lauded by tastemakers and fans alike for injecting much-needed creative impetus into Cape Town hip-hop’s stagnant undercurrent.

In the same vein, Dplanet has his detractors; he is the ‘white man‘ who came from the sea to exploit the culture so dear and close to the hearts of many ‘black folk‘. It is this two-sided perception which forms the crux of what I’d like to explore in this interview. In addition, I am interested in talking to Dplanet about the nuances of running an independent label in modern-day South Africa. What hazards are there? Why did he bother in the first place? And most importantly, why consider releasing music when, in his own words: ‘people want shit for free’?

“Uh, I don’t even know, the label’s been officially registered for four years”, says Dplanet, now etched comfortably on the opposite end of a plump, restaurant-style bench at a low-profile café on Kloof street; “you should be able to capture sound properly in there”, he’d said as we drove up the impossibly-narrow alley-way otherwise known as Kloof.

Dplanet’s dress sense accentuates his DIY ethic. Stylish jeans rest comfortably on a clean pair of Air Force 1s. The black scarf wrapped around his neck to ward off the chill (which seems to have crept out of nowhere) conceals what I had thought was a tattoo that reads ‘Pure Solid‘, a musical venture between him and partner Anne-Sophie Leens, or spoOky if you like. (It turns out that the words are carved in ink on the back of his hands instead. But more on that later though)!

Throughout the interview, his shades never come off; a stylistic choice perhaps, yet one that in no way detracts focus from the task at hand. We order something from the menu; his choice is more immediate, decisive. After much dilly-dallying with the waitress, I settle on something too – a smoothie with an exotic-sounding name – and proceed to tell Dplanet of how I got to know about the label.

The initial idea was to for Pioneer Unit to be a sound system, and as he says, “the problem was the money. We were looking at…I think a conservative estimate of a proper sound system is about R250, 000. And to be honest, I really needed someone to partner with who could run that, and I just couldn’t find anyone”.

While the soundsystem idea seemed elusive, a more immediate possibility was looming in the form of the ever-burgeoning and abundant talent of Cape Town hip-hop. He was attending regular shows by the likes of Driemanskap, and exchanging music with Ben Sharpa who, as he says, he knew socially before he knew of his emceeing abilities. Konfab was also there in the mix of thing; he was, according to Dplanet, very instrumental in suggesting artists who ultimately got featured on Pioneer Unit’s inaugural release, ‘Planetary Assault’. 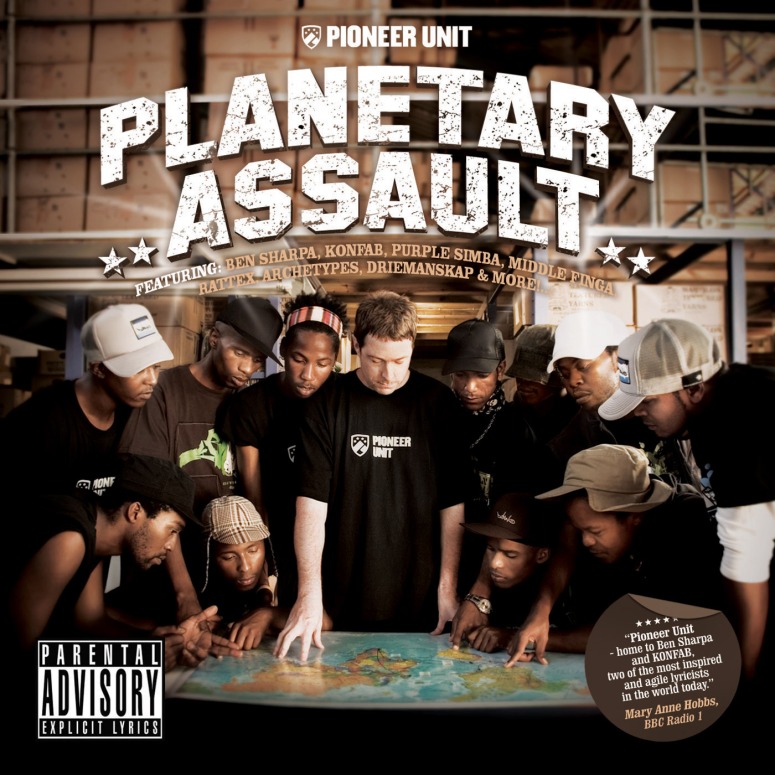 “I think on a kinda more basic level, I was working as a producer…just kind of giving beats to people, and people asking me to kinda work on their projects. And it was frustrating me that I had no control over those projects, and I didn’t necessarily think that [they] were heading in any particular direction” says Dplanet of his pre-label ventures.

Pioneer Unit was his way of being “in control of something; I could have my vision made real, you know”?! Besides the need for creative control, Dplanet had a desire for a label that would put out music that had a vintage cultural aesthetic to it; music with substance and relevance to its environment.

He moves on to lament the apparent lack of a culture of independent music in South Afrika. While there are a lot of independent musicians, there still exists a big gap of visionaries who are harnessing that talent and creating a viable end-product. To this end, Dplanet sees his label as that very much-needed link. Ironically, there never really was a solid business plan in place, and as he himself says: “the business plan [was] like: let’s make good music, and we’ll try to find some way of making money out of it. It [was] just purely based on passion”.

Currently, Pioneer Unit works with artists who, through a combination of sheer luck and a staunch self-belief, have managed to garner a sizeable following in their respective quarters. Driemanskap’s tell-tale swivelry melds menacingly with Ben Sharpa’s tunnel-vision tertiary raps; Rattex sits at a cross-road, somewhere between Jaak‘s kaapse flakte binary flows and Manqoba‘s youthful cadences. And all these characters are backed by the solid craftsmanship of beatsmiths such as Hipe, Planet Earth, and Dplanet. He states that what belies the Unit is a “blind belief that the quality of the artists that we’re working with, and our passion for it, means that it’s inevitable that we will succeed…whatever ‘succeed‘ means”.

The man’s blinding disdain for the outrightly commercial soundscapes constantly lambasted by radio stations onto the listener’s ears, would be ridiculous if he wasn’t so convincing in putting his point across (“I was listening to the radio recently, and was so amazed that there is so much of this commercial, crunk-type music happening in South Africa”). He is quite the avid cultural observer too, a social commentator as informed about food and cooking as he is about football and Internet penetration in South Africa.

Dplanet informs that “people are coming more and more on-line. I just read now that six million South Africans are on-line, which is double from 2007…through smartphones. Then I read another report saying something along the lines of ‘although there a lot of people with smartphones, they are not necessarily using them to access the Internet’”.

This lack of awareness poses a challenge to Pioneer Unit, one that threatens to alienate the label further from their target audience. As Dplanet puts it: “There is still a digital divide. The type of hip-hop that we make is not aimed at the affluent middle-to-upper class citizens. We still need to use mass media [to reach] people listening to the radio and watching TV. Having an on-line shop is kinda great, but it doesn’t really work in the South African context”.

The radio is not helping advance their course either. Besides Driemanskap – and Rattex to a certain extent – Pioneer Unit artists are, by and large, absent from commercial radio stations’ playlists. For a brief moment, he empathises with how these institutions carry about with their programming, pointing out that “people are so conditioned in South Africa to the so-called international sound that it actually clouds their vision. When they hear something that doesn’t fit that format, they can’t hear its potential as something that could also be popular”. As a result, commercial radio stations are faced with the predicament of playlisting content that caters to their audience’s preference in order to keep rating high for their ‘clients’ – the advertisers.

2 thoughts on “Interview with Dplanet (Pt. I)”